A little story by one of our members, inspired by a discussion at one of our Singing Sessions.

"Paul!" She isn't sure it's him. But it looks like him. "Paul! Sir Paul!" At the station, Wemyss Bay. Of all places. She's only come for the day, to see the glass roof. Well, why not? It is a smashing glass roof. Ha ha. The sky outside is a pale January blue. She can see the seagulls' feet overhead, yellow and flat on the glass, semi-see-through, lit up by the sun. There is a book shop she'll look at later, and the air is cold. It's nice here.

He turns, wearily. OMG! It's him! She gulps the diaphragm-deep breath she practised for Ding Dong Merrily On High a couple of weeks back.

"I'm really sorry Sir Paul, can I ask you a question? It's a music thing, not a", she flaps her hand, "mad fan thing".

He looks pissed off but manages to straighten up a little. She plunges in.

Not so Sound of Silence!

At our Singing Session on Wednesday evening, we were in the middle of singing The Sound of Silence when one of our ladies suddenly let out a yell and retreated to a corner of the room. Somewhat startled, and with the rendition of the song grinding to a halt, we looked down and discovered the cause of her alarm - a large spider had taken up its place within our circle! The spider appeared quite unfazed by us (unlike our member who, unfortunately, is less comfortable around spiders!) and seemed either to want to join in with the singing or to enjoy the performance. Perhaps spiders can sing? Who knows.

We carefully removed the spider from the room and placed it safely, nearby, where it could continue to enjoy listening to us singing and could join still join in, if it wished!

We have a suggestion box where our ladies can add details of songs that they think might be fun for the group to sing. Perhaps we will find a note in it, written in tiny writing, suggesting something from David Bowie's album Ziggy Stardust and The Spiders From Mars!

No Hairbrushes Required! Singing with Dynamic Meladies by Liz

Why come to the Dynamic Meladies singing group?

I've never been one to parade in front of a mirror with a hairbrush microphone,

doing a Kate Bush. But I always did like singing, after a fashion. Sadly, my own fashion, which was just a few notes in the middle and a squeak for anything high, and pot luck for the words. But that was ok, I only sang in the car.

After all the lovely sunshine we've had over the last few months, September might feel like a little bit of a let-down. Officially, September is an autumn month, so it heralds the end of summer and, already, we are starting to see the nights draw in. It doesn't seem so long ago that we were leaving our Wednesday evening Singing Sessions after 9.00pm and driving home in beautiful sunshine. Now the street lights are on and the evening air is cooler.

We might mourn the passing of the summer and the busy round of activities it brings with it but the autumn brings its own opportunities. 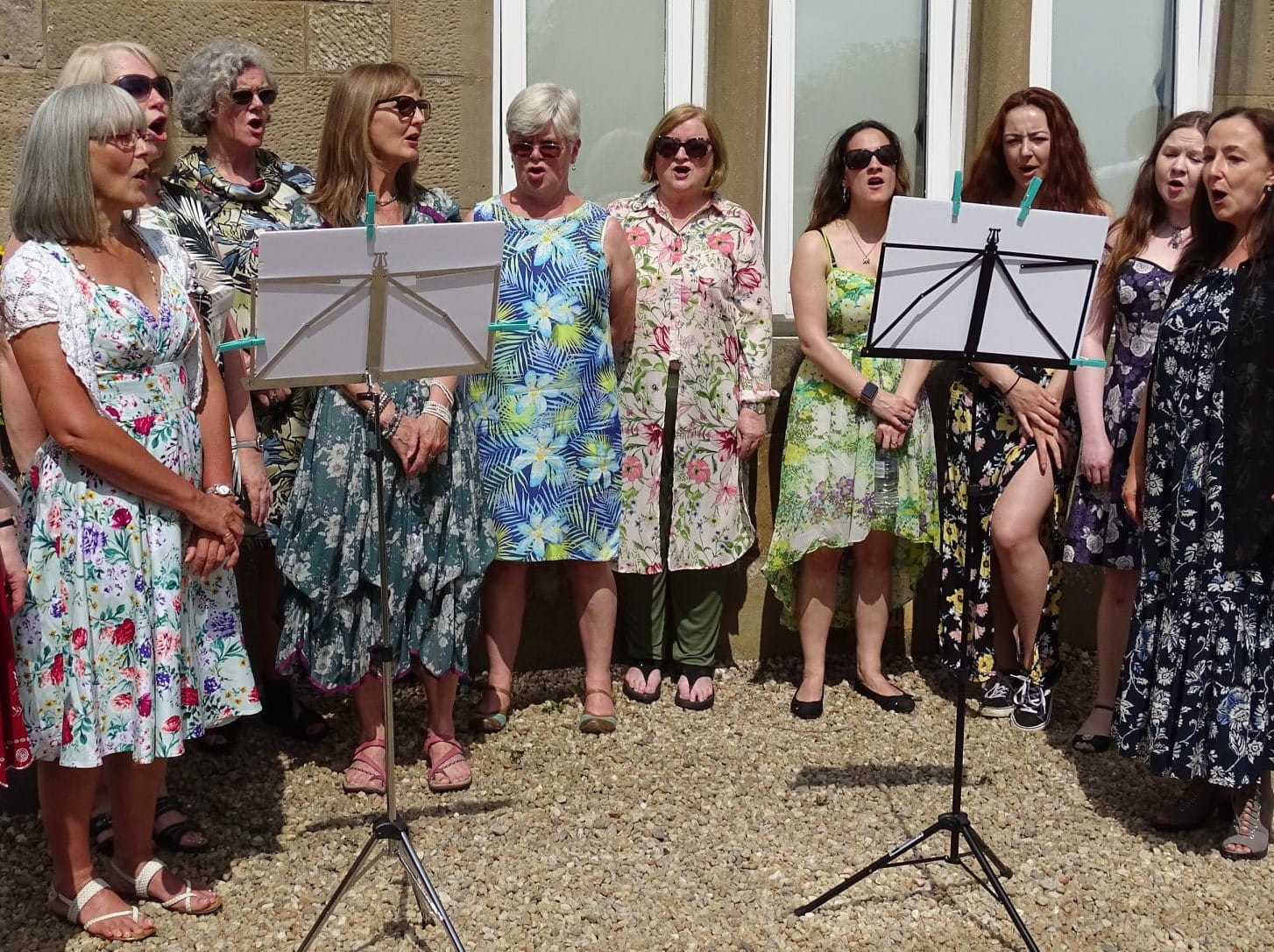 Opening our first outdoor performance with a song that includes the lines “Not a cloud in the sky, Got the sun in my eyes” (Top of The World) was always going to be a risk. This is Glasgow after all! Fortunately for us, however, the sun was indeed in our eyes (hence the dark glasses!) and we avoided the thunder, lightning and torrential rain that hit other parts of Glasgow during the afternoon.

On Saturday 9th June a group of ladies from Dynamic Meladies performed a selection of songs at a charity garden party event. The charity, Mothers Care India, raises money to buy school uniforms for children in India and we were invited to provide entertainment at the event. With 350 tickets sold for the event, this was no small undertaking.

Performing in the front garden to guests arriving for the event, presented us with a few challenges. The first of these appeared fairly quickly, as we were setting up, in the form of a bus rumbling along the road a short distance from where we would be performing.

Buses 0 Dynamic Meladies 8 (the number of songs we sang!)