A little story by one of our members, inspired by a discussion at one of our Singing Sessions.

"Paul!" She isn't sure it's him. But it looks like him. "Paul! Sir Paul!" At the station, Wemyss Bay. Of all places. She's only come for the day, to see the glass roof. Well, why not? It is a smashing glass roof. Ha ha. The sky outside is a pale January blue. She can see the seagulls' feet overhead, yellow and flat on the glass, semi-see-through, lit up by the sun. There is a book shop she'll look at later, and the air is cold. It's nice here.

He turns, wearily. OMG! It's him! She gulps the diaphragm-deep breath she practised for Ding Dong Merrily On High a couple of weeks back.

"I'm really sorry Sir Paul, can I ask you a question? It's a music thing, not a", she flaps her hand, "mad fan thing".

He looks pissed off but manages to straighten up a little. She plunges in.

He looks blankly at her - she's bonkers in the nut, she thinks, he thinks.

"I'm really sorry", she says, "it's just we're doing it at Dynamic Meladies, and no one's sure."

He raises one fine, arched eyebrow. God she loves his eyebrows. Though they're greyer than they used to be. Well, whose aren't?

"It's my group, for older ladies who only sing in the bathroom, and I couldn't sing, before, not really, and now I can do Ding Dong Merrily On High, all the way, and - you could come along if you wanted? Not that I'm saying you can't sing." She stops. "But you'd have to dress up. It's ladies only. But you'd be welcome."

For a moment it's hard to tell what he's thinking. He's still 20 yards away and she's been kind of shouting. All three people on the concourse are looking at her. He turns to walk down the glass-roofed passageway to the Rothesay Ferry. It can't be him after all. How embarrassing. The seagulls set up a raucous mocking cackle. "Shut up, you lot", she thinks. Then, he - whoever he is, half turns and over his shoulder he calls back, "Loch". Which could be 'love', or 'luck', or even 'look', she supposes. Or 'loch.'

Two weeks later, the buzzer goes in the Unitarian Church basement, Berkeley Street, Karen picks it up and it's a man's voice. With a Liverpool accent. "Erm. Is this the Dynamich Meladies?" They let him in and it's Sir Paul! He hasn't dressed up. But he has brought cake. Yey!

Actually. None of this happened. A person just went to Wemyss one day, on her own, on the train, and had fish and chips and rhubarb tart, and came home again. 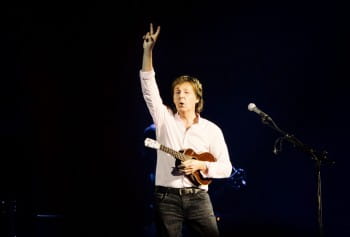